Framing—the use of the camera’s viewfinder—is essential to the distinction between, and the fusion of, the offscreen space beyond what the camera can “see” and the scene on screen (what film audiences see). Shots, composition, and mise-en-scène are informed and dictated by the coexistence of on- and off-screen spaces.

Seeing is not always believing, and, conversely, not seeing something can in fact heighten the tension. Offscreen sound or larger contexts could enhance what audiences see, or not see, on screen. We will explore this theme in the next section, “Examples.”

In an open frame, characters move freely within an environment that seems to have no boundaries, similar to that of film audiences’ reality. In this type of framing, after seeing a character at the corner of Central Park, for instance, film audiences would assume the existence of the entire New York City, the United States, and the world. The frame is a window on a larger world.

In a closed frame, characters do not have the ability to move at will, because there are social or political factors limiting their freedom. Similar to a painting, films with a closed frame depict characters who only exist in this enclosed world within the frame.

These two modes may coexist in the same film and be employed in different scenes for contrasting purposes.

In short, framing is a way for filmmakers to manipulate viewer perception and cinematic narratives.

Framing can influence how audiences see the characters.

In her essay on “Visual Pleasure and Narrative Cinema,” feminist film theorist Laura Mulvey points out that the framing strategy that fragments body parts–typically applied to female characters–sexualizes and objectifies those characters. The frame shows and focuses only on select body parts that are disconnected from the rest of the character’s body, thereby dehumanizing them. Her hands, feet, hair, or neck becomes an object to be admired or consumed.

An example is the opening scene of Lost in Translation (film still to the left; film clip below). Charlotte’s full body has been truncated. Only her back and bottom are on full view, and her face is not visible.

The film Lost in Translation (2003) opens with a closeup of Charlotte’s back and legs as she lies on the bed in panties. Her face is not revealed, and her body parts are detached from her as a human. The film cuts to an evening scene, full of neon lights, on the street in Tokyo, as the main character Bob Harris (Bill Murray) surveys the sights from inside his limousine.

Unlike live performances on stage, film is an editorialized medium, which means a finished film (post-production and edited) is similar to a print book. In theatre, the entire visible part of the stage would need to be “presentable” as part of the fabula of the dramatic narrative. In film, what matters the most is what is captured within each frame.

The significance of framing is dramatized in this metacinematic moment in a film about filmmaking. In Steven Spielberg’s 2022 semi-autobiographical film The Fabelmans, the teenage director Sammy Fabelman works with his friends on a makeshift set to produce a war film. Sammy puts his camera on an old baby carriage which serves as a platform dolly for smooth camera movement.

Since he does not have a budget to hire enough extras, his friends, playing dead soldiers in the previous scene, spring up as soon as they are outside the camera’s frame. They rush to the next filming spot and lie down to play dead soldiers again, just in time before the camera arrives. This clever arrangement enables the few amateur actors to create an illusion of a vast battlefield littered with dead bodies.

A film can tell an even more compelling or gruesome story by not showing everything within the camera’s frame.

Take, for example, one of the most gruesome scenes in King Lear: Act 3, Scene 7. Gloucester is blinded after he has been deceived by Lear’s two elder daughters and betrayed by his own bastard son, Edmund. After his blinding, Gloucester says “I stumbled when I saw,” referring to his failure to see the intentions of others when he still had eyesight. Now, even though he has no eyes, he sees the world more clearly.

It is challenging to film such a scene [read the scene here in the Folger Shakespeare edition online].

On the modern stage, Gloucester is typically tied to a chair and tilted back for the blinding, preventing audiences from a full-frontal view of the process. The limits of theatrical realism enhance the horror by way of suggestion. The sounds of gouging out eyeballs and dripping blood complete the scene.

On screen, the fictional frame contains the violent act but offers no immediate relief from the logic of Lear’s universe.

Indeed, not seeing is believing. Imagining the gory scene in one’s mind’s eye—accentuated by sound effects—can make the performance even more shocking.

Richard Eyre’s 2018 film of this tragedy takes this strategy. It does not show us the fingers that gouge out Gloucester’s eyeballs. Instead, with a medium closeup shot, the camera is trained on Regan’s facial expressions as Cornwall holds and guides her hand to complete the revenge act. As Regan closes her eyes and moans in ecstasy, she seems to be aroused by torturing Gloucester.

Instead of turning the blinding act into a spectacle, the film turns its eye on Regan and her husband. This is the power of framing.

Some films use a framing device to tell their stories. Baz Luhrmann uses the framing device of a television newscaster reporting on the conflict between the Montagues and the Capulets in his film William Shakespeare’s Romeo + Juliet (1996).

The film opens by showing a composed, dispassionate, female television news anchor on the screen of an antiquated television set. She reads the script in a deliberately old-fashioned manner. The script turns out to be the Prologue of Shakespeare’s play. 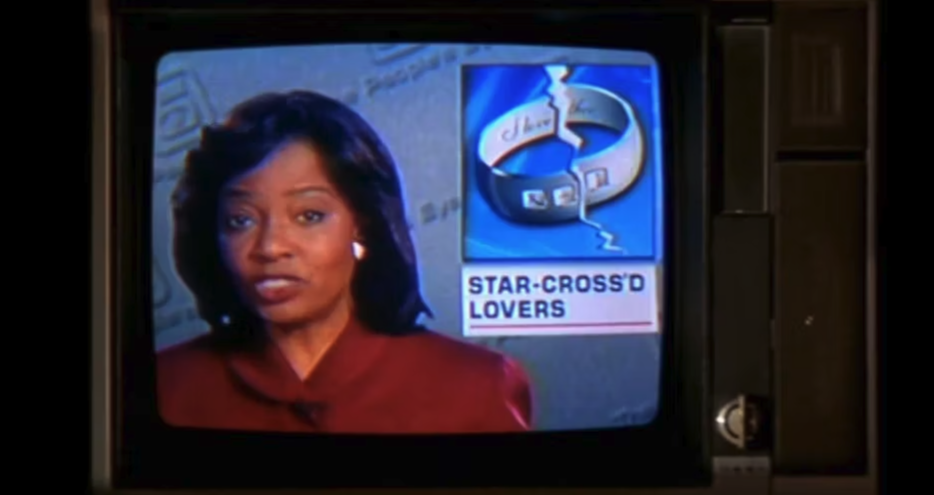 The film then transitions to a whooshing shot that “sucks” the film audience through the mouth of the announcer into a second iteration of the Prologue in “fair Verona” in full action, complete with monochrome footage from police helicopters.

Your Turn:      Analyze framing strategies and the framing device in the opening sequence of Luhrmann’s film. Why, and to what end, does the film dramatize the Prologue three times?

Hint:     The Prologue is dramatized on three occasions via three different types of framing: first, in a detached tone by a female news anchor, before a neutral background, reading from a script; second, by the voice of a male announcer in a low, overly dramatic, ominous but solemn tone against live-action shots, which is reminiscent of film trailer conventions; and third, as a print medium in which key words of the Prologue appear as headlines on newspapers.

Answer Key:      Watch this short video of Baz Luhrmann reflecting on his Romeo + Juliet with particular attention paid to framing.